Pompadour is a hairstyle for which women made sacrifices in the 18th century, using special frames to maintain volume, and poor American ordinary workers in the middle of the last century used ordinary machine oil for styling. The haircut can be called a continuous dissonance because at one time it was worn by the upper strata of society, aristocrats and royal entourage, and two centuries later it became a characteristic feature of the gangsters of New York quarters.

When did the pompadour haircut appear?

The appearance of hairstyles dates back to the 18th century because it was then that the world-famous favorite of the French king Louis XV, Madame Pompadour, introduced the fashion for lush styling. The marquise’s hair was combed so high that the birds could make a nest in it if they wanted. Later, other ladies of the court began to take an example from Madame Pompadour, taking up the fashion for high hairstyles. To keep the shape as long as possible, and the dimensions were truly majestic, the aristocrats used metal frames. It was only after some time that such “structures” made of wire on the head were abandoned, and they began to use special pillows to obtain the desired volume.

For men, the fashion for such styling came around the middle of the last century. The popularization of haircuts was due to the king of rock and roll, Elvis Presley. Of course, after so much time, the hairstyle has undergone significant changes – not a trace remained of the former greatness and pretentiousness. The pompadour was characterized by a long bang, laid back, and a high crown. A hairstyle like Presley’s became not only a trend of that time, but also a symbol of rebellion and innovation: it was worn by both students and bikers and gangsters. Fashion for pompadour cut quickly spread among Hollywood film actors, for example, at one time the hair was worn by John Travolta and Johnny Depp. 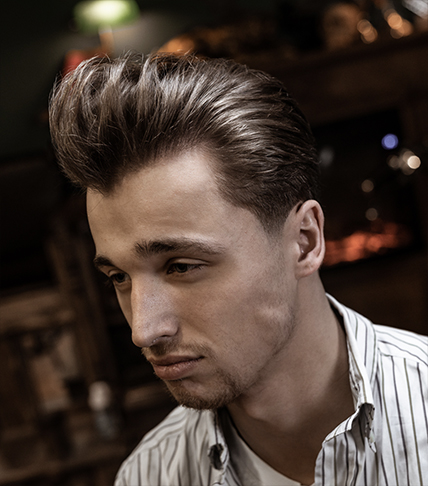 A pompadour with a short-cropped temporal region and long strands combed back with the formation of a characteristic tuft, which is also called “coca”, is considered a classic. The styling height can be varied and depends on the preferences and style of the owner of the haircut. Pompadour modifications that are in high demand today include:

It goes well with pompadour and its variations of facial hair: a mustache, beard and sideburns can be called the best friends of the owner of such a haircut. Check with your barber which option is right for you: Verdi, Garibaldi, or Hollywood Beard. If you want to avoid growing facial hair or its density is insufficient, pompadour goes well with well-groomed stubble.

Who is the pompadour haircut for?

Pompadour and any modification of it is considered a universal hairstyle that suits all men, regardless of age and hair structure. There are two critical points that determine whether you should do this haircut, or you should give preference to another. The first aspect: the shape of the face. Let’s consider this nuance in more detail:

1.  An oval face shape is considered ideal, so its owners can safely experiment with pompadour and its variants.

2.  Round face shape. On such men, the pompadour also looks great due to the lengthening of the profile. The only recommendation: owners of a round face should choose a combination of pompadour and fade.

3.  Triangular face shape. The pompadour in this case is acceptable, since it can bring the profile closer to the ideal oval. In this case, it is better to avoid too high “coca”, and give preference to neat and small styling.

4.  Square shape of the face. Such men need to monitor the smoothness of the styling and avoid pronounced angles. That is why it is recommended to choose the option with slightly elongated temples. The combination of pompadour and Freud in this case is excluded: this kind of hairstyle will only highlight the angularity of the face.

The second important aspect is how much time you are willing to spend on grooming and styling. The pompadour is a whimsical haircut that requires attention. If you are not ready to spend time on all the necessary procedures every day, it is better to refuse a haircut, as it will look unkempt and untidy.

The main benefits of a pompadour haircut

The main advantages of a haircut include the ability to experiment with styling. There are many styling options, so you can adapt your look for any occasion: a business meeting, a romantic date, or just a meeting with friends. Although the pompadour received the status of a pretentious and eccentric haircut at one time, the hairstyle will be appropriate even in a business environment.

What are the features of a pompadour haircut?

A characteristic feature of a pompadour haircut is shaved or short-cropped temporal and occipital regions and long, raised strands, laid from the frontal zone.

Who is the pompadour hairstyle suitable for?

A properly chosen pompadour haircut will suit men with almost any type of face, except for an elongated one.

How to style a pompadour haircut?

Styling is carried out using styling products that are applied to damp hair and styled with a hairdryer.